Across the nation, there have been media reports of new schools that cause physical harm to occupants from the gassing off of new building materials and of old buildings with toxic mould, combustion leaks, and other indoor air quality deficiencies that contribute to poor health and lowered performance.

A study by Honeywell in 1994, and more recent work by the US Environmental Protection Agency and others have found impacts on academic performance add to the health concerns for young people attending worn-out, poorly maintained and generally substandard school buildings. The size of the problem is only just being recognized, but in Nova Scotia and some other areas, resources are going into upgrading and replacing worn out schools in a manner that will contribute to better health and learning.

A new approach is emerging – designing and building schools to attempt to ensure high quality indoor environments without breaking the budget. A new benchmark in this effort was opened in Halifax on January 8, 2003. The old Halifax West High School was closed in August of 2000 because the school had outlived its life span and had been causing significant health impacts on teachers and students for several years.

CASLE’s work toward healthier schools, however, did not begin with Halifax West, nor has it stopped there.  Since the early 1990’s CASLE has assisted schools, school boards and government departments to improve the indoor environments of existing school, and since 1997 CASLE has provided reports and information on many aspects of new “Healthy” school design and construction.  Several new schools have been built, each one contributing more to the collected knowledge about design, construction and operation of Healthy Schools.

The Nova Scotia Department of Education decided to use the construction of a new Halifax West to “raise the bar” in building schools that will be healthy buildings from the day they open, and remain healthy buildings for the long term. It struck a Healthy Schools Construction Committee to guide the process.

Halifax West High School was a fast-tracked school. It took just under 2 years from the time it was announced to the time it was completed. With 1500 students, it is the largest school Nova Scotia has built in at least 30 years. While breaking new ground in healthy school design and construction, and with the extensive evaluation of construction methods and building materials which took place at every stage, the school was still built on time and below budget. In fact, the school was completed ahead of time, and left empty for six to eight weeks in order to allow the building and contents to off gas. The demonstration that healthy schools don’t have to cost more takes away one of the common arguments against modifying established building practices to accommodate health concerns.   Most importantly, there were none of the usual health complaints that accompany most school openings, and the indoor air remains excellent to this day.

What makes a Healthy School different?

There are over 400 details. But for interest, here are thirty examples of healthy school building practices which were incorporated into the new Halifax West High School. 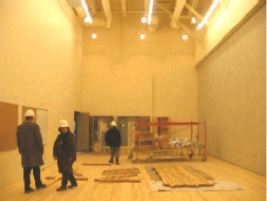 This list just skims this subject of Healthy School design and construction.  Maintenance and operation are equally important to creating long term success.  In addition, much was done to make this school also a “green” school.  For example, the well-designed garbage recycling system includes a recycling room with floor drain for hosing down, and with almost no fossil fuel consumption, the school helps meet Canada’s Kyoto commitments.

The health benefits to students and staff in Nova Scotia’s schools have not stopped at the doors of Halifax West.  Most of the innovations incorporated into this school are part of the Design Requirements Manual, a provincial government document which establishes building standards for all public buildings in Nova Scotia, and it continues to be upgraded with the newer schools.  Epi-pens are reported to be virtually unused in these new buildings.  Many teachers who experienced health problems in their schools have been transferred to the Healthy Schools and they report feeling as energetic at workday’s end as they feel when the days begin.

Copyright © 2000 Canadians for A Safe Learning Environment,
All Rights Reserved.